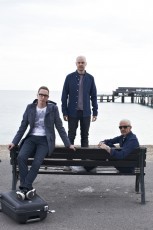 The story is a simple one: Above & Beyond are the biggest band you’ve never heard of.In the UK they’ve sold out London’s Alexandra Palace. In the US they’ve sold out Madison Square Garden and The Hollywood Palladium, the latter more quickly than any act in history. Their radio show, recently renamed “Group Therapy”, has broadcast over 500 episodes since 2004 and reaches 30 million listeners in 35 countries – every week.They have released three studio albums, two remix albums, one side-project album. Their own labels, Anjunabeats and Anjunadeep, are among the most respected imprints in the global dance music scene and have released some 23 Above & Beyond albums and compilations in the last 12 years. There have been dozens (and dozens) of singles and mix albums and offshoot projects, all snapped up by a devoted worldwide fanbase that has happily, passionately followed this London-based electronic trio since their formation in 2000.

As artists they have sold a million records.

Above & Beyond are not, to them, The Biggest Band You’ve Never Heard Of. They’re just their band. The band they’ve followed round club gigs, arena shows, American dance festivals, European rock festivals, and parties from Bangalore to Beirut, from Branson’s rocket (they soundtracked the launch of Virgin Galactic SpaceShip Two) to Brazil’s beaches (one million fans in Rio for New Year’s Eve ’07). To their fans, Above & Beyond are just The Biggest Band In The World.

But now the rest of us can catch up. With the first single from their fourth album, Above & Beyond are ready for their close-up. With the summer-coloured, electronic-soul epic Blue Sky Action, the secret is out.

Explaining the trio’s huge popularity-meets-curious obscurity, Jono Grant thinks, “it’s similar to a heavy metal band in that they they’re not on the radio so much. But they have that fanbase that they’ve built up over a long period of time, rather than going for a money shot and having the big-name vocalist,” he adds, referring to the default option of many a dance outfit that started off as “just” producers. “It’s a case of we’ve built it very, very slowly, and we haven’t had massive career spikes. We’ve flirted with mainstream things, but we’ve not really gone all out. We did remix Madonna, though…”

In 2001 Above & Beyond were hired to create a club mix of What It Feels Like For A Girl. Then the video was banned by MTV. “It’s got car crashes and everything,” laughs Tony McGuinness. “We thought we’d won the pools but no one saw it. Classic!” he hoots.

“And!” adds Paavo Siljamäki, the final third of this exuberant, savvy and brutally honest trio, “everyone thought it was a Paul Oakenfold track ’cause he’d remixed it as well! But,” adds the Finn who met Grant at the University of Westminster where both were on music courses, “the dance music scene has got much, much bigger and the sound that used to be called underground is a lot closer to the mainstream. So we’ve naturally found ourselves at a crossing point. But still I think in this new album the primary focus is writing songs for our purpose. We are,” he smiles, “kind of a selfish band in that way.”

They’re also a smarter band that way. Yes, the three men of Above & Beyond can craft big, transporting, electronic dance anthems. And for sure, they grew out of the trance scene. But they can also write emotive songs. Complete compositions that move the head and soul as winningly as they do the heart and feet.

As much was evident in the Acoustic album they released earlier this year, in which they dug in their own crates to create stripped back, “revamped” versions of songs from their deep catalogue. It was a project whose success surprised even Above & Beyond. Four sell-out acoustic shows at London’s Porchester Hall led to two sold out nights at Los Angeles’ Greek Theatre, with fans snapping up 12,000 tickets in a matter of hours. The combined views for the 17 Acoustic videos on the band’s hugely trafficked YouTube channel currently number somewhere north of five million.

And it was evident in Sticky Fingers, a teaser track released earlier this year. Like Blue Sky Action, it features the powerful, soulful vocals of Alex Vargas, plangent piano/synth chords and lyrics that mean something.

“There’s and a sadness to Above & Beyond’s music which has gone through right from the start,” says Grant. “Which is perhaps surprising when you think that we make party music ostensibly. And that’s not something we’ll claim we pioneered, but I remember distinctly the first time we played [2006 single] Alone Tonight a long, long time ago, at Global Gathering. And we were worried whether even that title alone was alright! Then there were 5000 people in this tent together singing it. And suddenly you get it.”

Above & Beyond, as rigorously focused on the road and on stage as they are in the studio, are maestros at crafting that elevational moment of communal emotion – whether up or down.

“It feels very limiting just to make music for Friday night,” offers McGuinness. “‘Make some fucking noise, put your hands in the air, shake your booty’ – all that stuff. What about Sunday, Monday, Tuesday, Wednesday, Thursday? What about the rest of your life? What happens after you meet the girl or guy in the club and you get together and start living your life? There’s so much more to write songs about than partying.”

Maintaining quality control is paramount for Grant, Siljamäki and McGuinness. They built a unique, independent, standalone artist and business organisation (comprising of record labels, an artist management company and a publishing division, and employing around 20 people) that, from the outset, had 360-degree control, vision and aspiration. Similarly, they never wanted to freight in this or that Big Pop Star for a guest vocal. They wanted their own singers, perhaps with their own lyrical ideas and definitely with their own worldviews. So the entirely self-funding, self-motivating Above & Beyond maintained a coterie of select collaborators. So their new album, which is “75 per cent” complete in their south London studio HQ, features appearances from regular vocalists Zoë Johnston and Justine Suissa.

But for now, the singer who’s front and centre with Above & Beyond is Alex Vargas.

“He’s done a couple of major label albums, hundreds of gigs, really accomplished live singer, looks great,” hymns McGuinness. “We saw a couple of his YouTube videos and just thought: this guy is just a force of nature. He’s young, he’s good looking, his voice has a little bit of Joe Cocker in there…”

Sticky Fingers and now Blue Sky Action: they add up to a killer one-two punch to introduce Above & Beyond as they embark on the next stage of their stellar career.

According to Siljamäki, their ambitions are simple. “We’re trying to write music for 25 years from now, rather than music just for today. Music is timeless when it’s good. Genres will always move and change but songs are forever. That’s part of our challenge, and part of Above & Beyond’s identity.”

And, says Grant, referring to the album they plan to release at the start of 2015, that means applying old-fashioned values to future music. “You want to make something where an album isn’t just a carrier for a few singles. Especially in dance music, where so many albums are just filler around the single. Why shouldn’t an album be listenable from start to finish?”

“To me, it feels the world’s moved towards us,” concludes McGuinness, “not the other way round. It’s great that there’s so much attention and innovation in electronic dance music. But doing the Acoustic thing was great in that it showed we exist in that scene – and we exist out of it. To be able to survive out of it so ably was a validation of what we’re really about: that Above & Beyond are a band.”

They’re the biggest band you’re about to hear a lot more of.