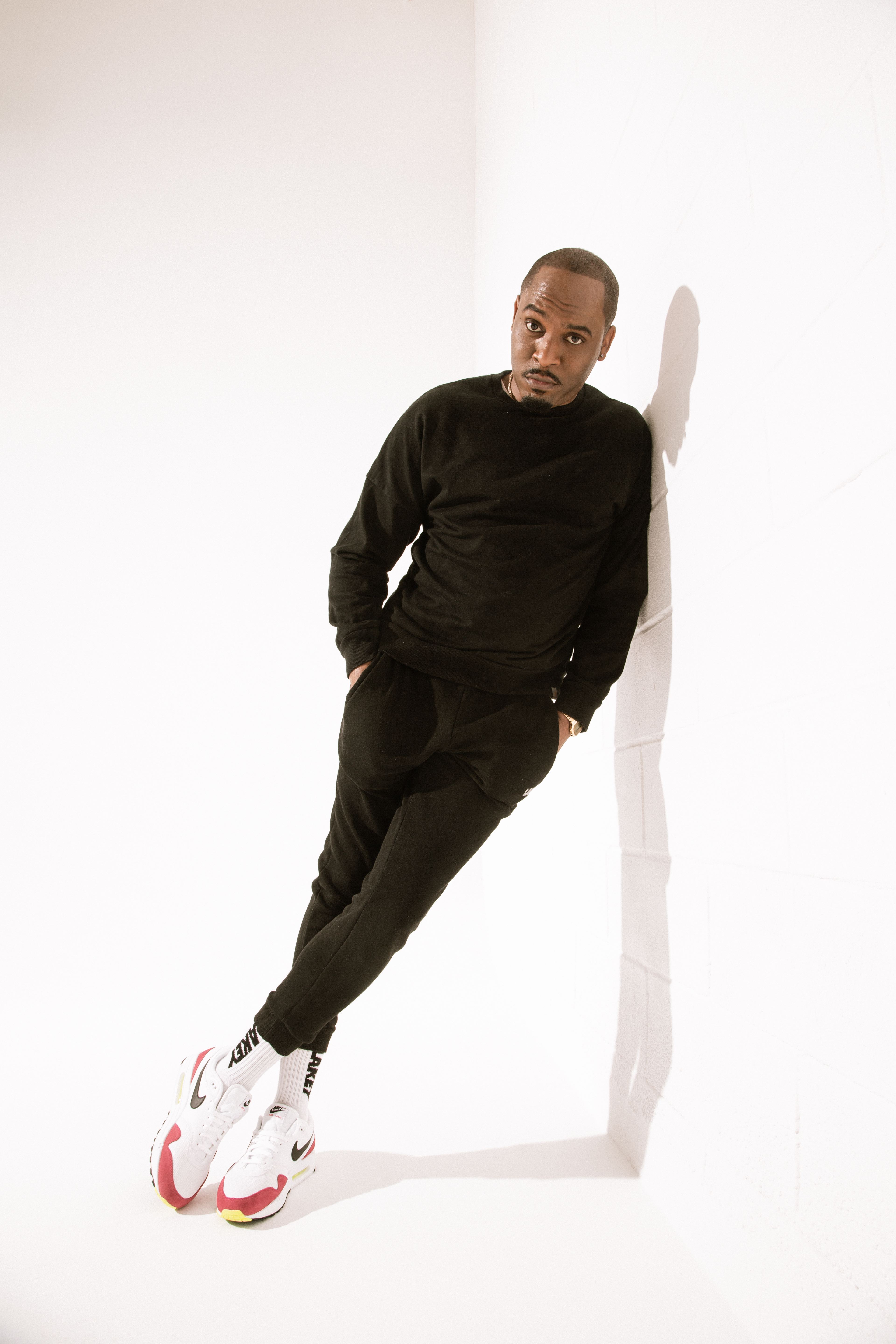 If you want to understand Dane Baptiste’s philosophy it can be summed up in two words. Question Everything. Which just happens to be remarkably similar to the title of his acclaimed podcast, Dane Baptiste Questions Everything, in which he tackles a diverse range of subjects from politics and theology to ecology and the changing contours of comedy.

“Yes, question everything. I think it’s an idea for life in general. I like to describe myself as a knowledge socialist. I feel like knowledge is power and that it should be shared.”

Baptiste is unfiltered, provocative, challenging and the kind of comedian who is not afraid to tackle difficult subjects. His 2017 show, G.O.D. (Gold. Oil. Drugs.) examined the links between power, money and religion: “Oil floats on water. Just like Jesus…”

Now in his mid-thirties, he is very much a stand-up trailblazer. In 2014 he became the first black British solo comic to be nominated for the Edinburgh Comedy Award Best Newcomer prize at the Edinburgh Fringe for his debut Citizen Dane. The nod meant a lot to him, even though he didn’t initially realise the significance of his achievement.

“It definitely helped my career. I don’t think I was even aware of nominations before I went up there, but my dad lent me money so the last thing I wanted to do was come home empty handed. I’m very grateful for it. I think it changed the perception of a lot of performers who felt like Edinburgh, maybe from a racial or class perspective, wasn’t for them. Although it’s a gift and a curse. Then you have to kind of build on it or you feel the pressure.”

Baptiste’s Edinburgh success helped to land him the BBC Three sitcom Sunny D. He wrote it and played the lead character, a young man in a dead-end office job still living at home with his parents. It was inspired by his youth in Lewisham in South-East London. “It was pretty autobiographical. The family element was very similar to my parents, who came over from Grenada in 1967. They were a lot stricter than my friends’ parents.”

Comedy was always popular at home and something that brought the family together. “Police Academy, Russ Abbot, Hale and Pace, Cannon and Ball, French and Saunders. The sketches on Comic Relief…”

While the BBC decided not to recommission Sunny D, it may live on in America, which he is understandably excited about. “Lionsgate purchased the intellectual property to Sunny D to remake or reformat it for a US version which I guess is arguably a better validation than having a second series on the BBC.” One of the people behind it is Keenen Ivory Wayans, who created the sketch show In Living Color, which Baptiste used to watch when he was young. “He worked with Eddie Murphy, so for somebody of that stature, one of your idols to want to work with you, it’s insane.”

His new tour is called Chocolate Chip and tackles race and more from his typically probing perspective. “My shows always start off being observations on a micro-social level and then on a macro-social level. Chocolate Chip is about the rise of Alt-Right politics and identity politics, mental health issues and body dysmorphia, how trauma affects peoples lives and how racism has been left out of that conversation. Normally if you make any comments about racial inequality or economic inequality people will say you have a chip on your shoulder. So I’m embracing that chip and calling it Chocolate Chip. The world, to Baptiste, is in a bad place at the moment, “If you’re not angry you’re not paying attention.”

It sounds serious, but there will, of course, be jokes too. Baptiste has an innate talent for taking a weighty subject and making it funny. In his 2015 set, Reasonable Doubts, he talked about a “Nasblaq” index which rated black celebrities. He joked that while Idris Elba and Lenny Henry jostled for the top position he was lagging behind at 674th, “between Trevor McDonald’s travel agent and Tinie Tempah’s barber.”

As well as Dane Baptiste Questions Everything he is part of another discussion podcast, Quotas Full, where he can express his ideas. “Myself and other BAME comics felt like our voices aren’t very much represented on panel shows and within most comedy formats as well. So it’s an idea spearheaded by my friend Kae Kurd, myself Funmbi Omotayo and Ola The Comedian and it’s been very well-received.”

Baptiste has come a long way in a few short years. After leaving selective secondary school Haberdashers’ Aske’s in New Cross he studied business at Bradford University but never really enjoyed his lectures there. “Academia is the process of memorising the dots whereas wisdom is being able to connect the dots.”

It was around 2006 that he first tried stand-up and finally found something that he enjoyed. “Stand-up is my first love and the place where I’m not subject to any censorship. Comedy was my way of rebelling. I grew up in a household where children were seen and not heard.”

A relationship had just ended so he also had time on his hands in the evenings. “I’d put all this energy into trying to make others happy, so I thought what if I put all this effort into something I care about. There was no such thing as a stable job anyway around then, so I thought I might as well do what matters to me.”

He certainly puts lots of thought into his comedy. “I’m a Virgo and apparently this means that I’m very critical.” Do you sometimes overthink things? He laughs: “Massively!”