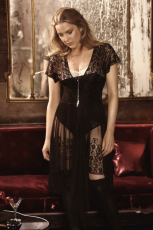 Produced by David Foster, ‘Wallflower’ features Michael Bublé (who duets on the classic ‘Alone Again’), Bryan Adams who not only lends his vocal talents to ‘Feels Like Home’ but also shot the cover art and a new song written especially for Diana by Paul McCartney called ‘If I Take Her Home Tonight’.

Diana Krall has sold more albums than any other female jazz artist in the last 30 years, establishing herself as one of the best-selling artists of her generation.

‘Wallflower’ follows last year’s acclaimed ‘Glad Rag Doll’, produced by T Bone Burnett.  Diana Krall is the only jazz singer to have eight albums debut at the top of the US Billboard Jazz Albums chart. In addition to 5 Grammy Awards she has won eight Juno Awards and has also earned nine gold, three platinum and seven multi-platinum albums in the US.