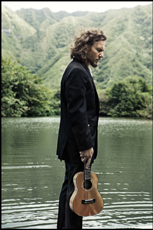 The critically celebrated soundtrack for the motion picture Into The Wild (2007) marked Eddie Vedder’s first full release as a solo artist. The album earned Vedder a Golden Globe Award for song ‘Guaranteed’ as well as a Golden Globe nomination for his contributions to the film’s original score

On the heels of Into The Wild’s release, Vedder embarked on a sold out, multiple-leg solo tour across North America. Following the release of ‘Ukulele Songs’, he again hit the road in 2011, with sold out shows in Australia and the United States.