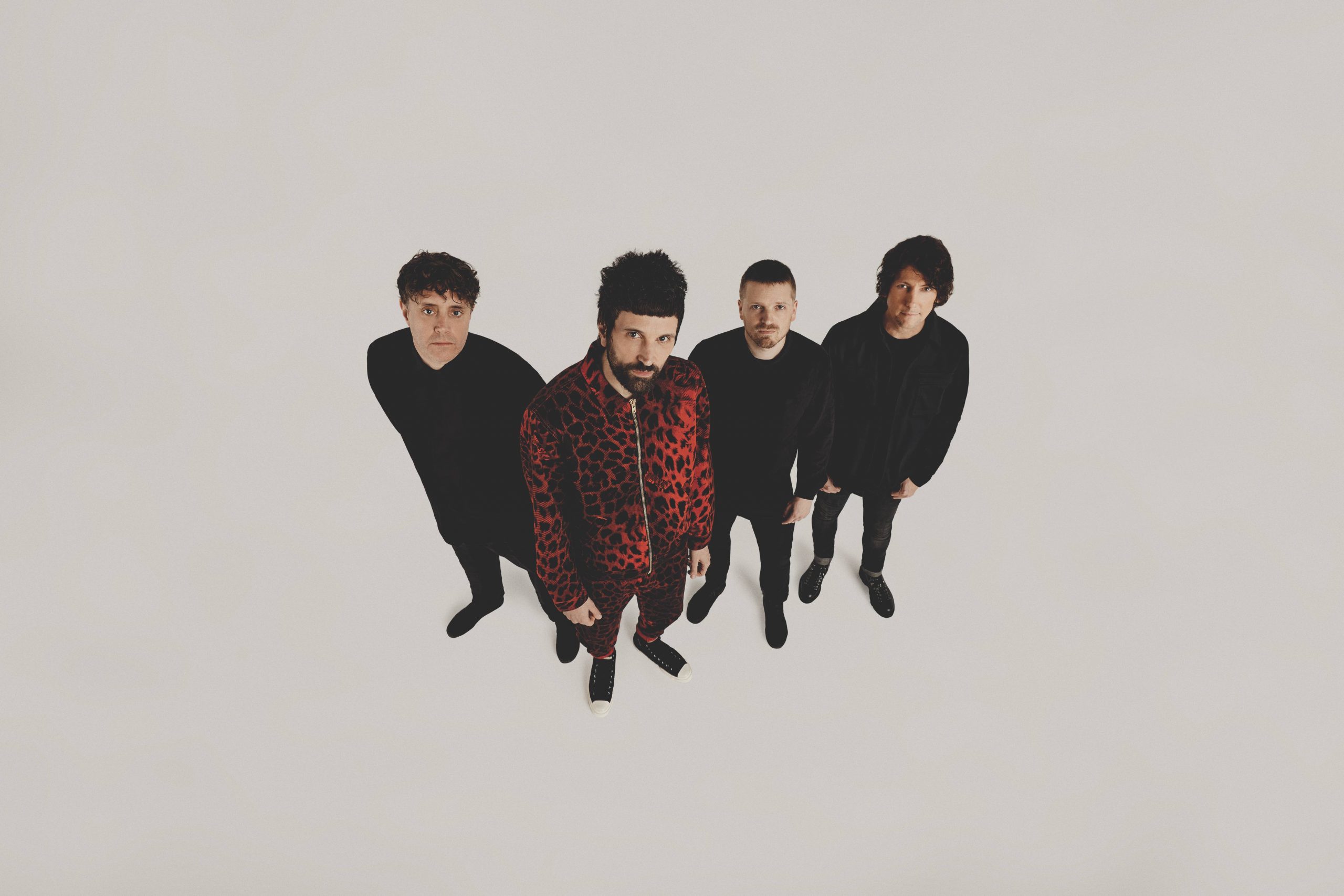 The first sound on Kasabian’s new album is that of the sea lapping at the shore, waves gently crashing onto a beach. There might be an immediate temptation to suppose that this is some sort of sonic metaphor for the five years the Leicester-based group have experienced since the release of their last album, a time in which singer Tom Meighan left the group for reasons well-documented. Though none of those were band-related, the events of last year led to widespread speculation about the band’s future both from within and without.

Yet Kasabian’s sea is not one choppy waters. Instead, this opening moment is the enticing sound of horizon-spanning possibility.

True, Sergio Pizzorno, Chris Edwards, Ian Matthews and Tim Carter have found the tide heavy for reasons beyond their control at times, but as the title of their seventh album suggests, their experiences have not blunted their creativity or diminished their vision. Instead, they bring us The Alchemist’s Euphoria, Kasabian’s most ambitious record yet, one that finds its creators pushing the limits of artistic ambition forwards.

“I went back to the day, just after everything kicked off,” recalls Pizzorno of the moment he resolved not to give up on his band, his artistic legacy and his life. “I went to see my sister who lives by the sea. I just sat there, looking out. It was just me looking out to sea, this vast space, and I imagined us in this little boat, huge fucking waves crashing in. It’s like, do you get in the boat? Do you risk it all to see what you can discover? Or do you sit on the shore and go, ‘No, I’m scared. I’m just gonna sit here and disappear.’”

With all of the band agreeing that slinking away was not a possibility – “This isn’t over yet, we all knew there’s more to this story!” declares Pizzorno – they all soon came to the realisation that for Kasabian to continue its songwriter, guitarist and producer would need to add the role of frontman to his CV.

“We did talk about getting a singer but we always came back to the same opinion, no one knows the songs better or can sing them like the person who wrote every single word,” explains Pizzorno of his move to centre-stage. “I can connect with those songs better than anyone can, they flow within me. So in terms of me becoming a frontman, it’s an opportunity. You just have to solve the problem in your head. You go ‘fucking hell, not sure about this, I was happy where I was’ but then if you don’t stand up, you don’t try, what do you do? Spend the rest of your time thinking what if? I can’t do that. So then you have to just analyse the greats and go, ‘Okay, why do they do what they do?’ Watch, some old VHS tapes and go, ‘Fuck, what’s Iggy doing? How are they delivering?’ Then you can start getting your head around becoming that person on stage.”

The change of primary vocalist (Pizzorno has sung on all of the band’s previous records) means The Alchemist’s Euphoria immediately sounds different to its predecessors. However, a lack of continuity is actually one of this band’s enduring strengths. Always keen to embrace new approaches and styles from album to album, Kasabian have revelled in throwing out the blueprint every time, and though this latest phase represents one of their biggest realignments since the group started in 1997, flux is always an opportunity for Kasabian.

“If you track our career, each album is bonkers compared to the last one,” grins Pizzorno. “Some people are bound to say, this new one doesn’t sound like Kasabian. Well, nor did the last album and the one before that didn’t either! But they’re all written by me, so nothing has really changed. In terms of the vision, the artwork and the aesthetics of this record, it is on the same trajectory as it was always going. Obviously, a big element has changed, but in terms of what Kasabian is, it was always going to go this way.”

Unsurprisingly for a band who resolved to get in the boat and explore the future, the trajectory Kasabian have followed for The Alchemist’s Euphoria is bold and daring.

Guided by a series of self-imposed principles (no lockdown songs, strict track lengths, no lyrics about the band and a loose narrative tracking the journey of the alchemist figure at the record’s heart) the album embraces modern pop production, yet it is also its master as it delivers a fresh, emotionally resonant take on not just what Kasabian is, but what a band in the 21st century can be. With a title that inherently celebrates the joy of creation, the album correspondingly fizzes with an unrestrained yet focused creative energy.

“From the start, I had the alchemist,” explains Pizzorno of his inspirations. “The symbols and the mystical part of alchemy has always fascinated me. Then I thought, being in the studio: you’re an alchemist, you bring together little bits of synths or guitar loops – especially our music, it’s all over the place. Then I was drawn towards the notion of euphoria. For us, the euphoric side of Kasabian is the most exciting thing about it. Why are we great live? I feel something that separates us from a lot of other bands is our euphoria, bringing people together to celebrate and be a part of something. So I put those two words together, and that made me think of the inception of a song. You’ll play a riff, have a beat or write a lyric and in your head you suddenly visualise how this amazing thing can happen. Then the hard work begins, but that moment of inspiration is the absolute addiction. Anyone who creates anything will know it! So The Alchemist’s Euphoria is that and what a starting point. It inspired us to really push to make something beautiful.”

As an initial impulse, the Alchemist’s Euphoria’s tracks are imbued with both an intricacy and a communality that this guiding concept invokes. Epic yet personal, full of intimate emotions that can be universally felt, as the sea sounds start to fade opening track Alchemist arrives to remind us we are all practising alchemy daily, constantly creating our own gold in our lives from the world around us, and this album is going to reveal that resilience.

“It felt for me it had to be a personal journey of sorts, a hero’s journey in a way,” suggests Pizzorno of the album’s embrace. “I feel like everyone has that internal voice, everyone gets through the day talking to themselves, connecting with the 50,000 personalities you have inside you. I wanted to celebrate that.” And what a celebration… Recorded at Pizzorno’s own studio, The Sergery, along with additional sessions in Henley with producer Fraser T Smith (Dave, Stormzy, Anne-Marie) who helped craft several tracks (“He’s a Leicester City fan, so it was an instant connection,” says Pizzorno. “Just to have that Samurai-like teacher who just knows music inside out was insane!”), having envisioned themselves sailing into the unknown when they first resolved to continue, in the studio Kasabian’s voyage soon took them beyond the creative horizon.

The rolling flows of second track, and single, Scriptvre insistently urge a reprogramming of self-perception rather than just settling for the same, Rocket Fuel turns barbs and slights thrown against its creators into the foundation of euphoric mosh pit banger, while Strictly Old School revels in the strength and warmth of true friendship accompanied by triumphant psych synths that the likes of Kendrick Lamar or Pusha T might envy. “I love the sounds of their records,” Pizzorno confirms. “What’s interesting though, is if you listen to our first album you’ll hear those psychedelic modern synths too. The way they put their records together now is how I’ve been making records for 20 years.”

Having reacquainted audiences with Kasabian on its standalone release last year, the boisterous Alygatyr provides an explosive launchpad before The Alchemist’s Euphoria serenely reaches for the stars with a suite of space-inspired tracks. The Wall, TUVE (pronounced The Ultra View) and Star Gazer, all bathe in the starlight of possibility while sharing a galactic-sized feeling of hope.

“I’d always wanted to do something with the idea of seeing the world from outer space. How that changes astronauts’ personalities, because they see this pale blue dot, or whatever, but I felt I couldn’t go there before,” Pizzorno explains of how space became an important part of the album. “But fuck, that’s what happened to us. We’ve all had an out of body experience of seeing our band from an angle or place that we never thought we’d ever see. So I thought it interesting to have that perspective as part of this record somehow.”

An emotive, blissful touchdown comes through Chemicals, an encompassing pop moment. The album finishes with the “almost nursery rhyme-like” soothing hook of Letting Go, before The Alchemist’s Euphoria ends its journey by returning to the shores where it all started. This time though, the sound of lapping waves welcomes our travellers home. Changed but inspired by their journey, Kasabian have returned artistically richer and stronger.

“It’s definitely music to make you feel like anything’s possible,” concludes Pizzorno of The Alchemist’s Euphoria. “And it feels really exciting because, like always, this band can now go absolutely anywhere. I think this record is just the beginning of something completely new and interesting.”

As the creativity and the ambition of The Alchemist’s Euphoria shows, Kasabian’s journey… their story is really only just getting going.