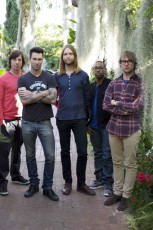 Adam Levine acknowledges that the title of the newest Maroon 5 album is something of an inside joke – a wink at the Los Angeles-based band’s seeming omnipresence, particularly in the wake of the frontman’s joining the cast of NBC’s The Voice and of ‘Moves Like Jagger,’ the 2011 smash that topped charts in 18 countries across the globe and became one of the most paid downloaded songs in history.

“It’s like, ‘We get it—we’re overexposed,’” Levine says with a laugh. “We’re just trying to preemptively go where the conversation is headed anyway. We figured we’d get there first.”

Check this out, though: If ‘Overexposed’ gets at the truth of Maroon 5’s sky-high visibility – perhaps you’re reading these words in preparation for spreading the word a little further yourself – the title carries another meaning, as well, one that runs a few inches below the surface of things. After a decade of activity in which the 3 time Grammy-winning quintet has gone from playing tiny L.A. clubs to becoming one of the biggest bands in the world, this album captures Maroon 5’s decision to open itself up to risk.

“I feel like we’ve been standing on the edge of a cliff for a long time,” Levine says. “We’re a band that’s always been close to being full-on pop, but that’s rooted in a lot of other things: rock, soul, funk, the list goes on. ‘Overexposed’ is the first time we’ve ever completely embraced the idea of making pop music—of making songs for the radio. We just said, ‘Let’s not be afraid to do what we basically are.’”

The decision was more than a matter of mindset. ‘Moves Like Jagger’
marked the band’s entrance into the waters of co-writing; until then Levine and his bandmates – guitarist James Valentine, bassist Mickey Madden, drummer Matt Flynn and keyboardist PJ Morton (currently filling in for Jesse Carmichael, who’s on hiatus) – had prided themselves on the fact that they handled all of the oufit’s music in-house. “But ‘Jagger’ was an amazing experience,” says Valentine, “so we figured we’d try it again.”

“We gravitated toward certain people for various reasons,” Levine says, pointing to Maroon 5’s 2010 tour with OneRepublic as an example. “But when you get down to it, there’s a reason that the best writers in the world are as successful as they are. And there’s a lot of people on this record who had never been in a room together until we put them there. We were into making these strange concoctions that don’t exist in the rules.”

Indeed, cuts like the electro-reggae ‘One More Night’ and lead single ‘Payphone,’ with a guest verse by rapper Wiz Khalifa, demonstrate how difficult it is to categorise Maroon 5’; the same goes for the funked-up ballad ‘Beautiful Goodbye’ and ‘Doin’ Dirt,’ a propulsive disco-rock jam with harmonies that Valentine says reveal the influence of Hall & Oates.

“I love how ‘Payphone’ seems like a such sweet song until the chorus comes in,” Levine says, referring to the part of that tune where he declares, “All those fairy tales are full of shit / One more fucking love song, I’ll be sick.” “It’s totally subverting the song in this way that makes you lean in and listen,” he adds.

“I think I might be most stoked on ‘Fortune Teller,’ which started on my laptop while we were in the lounge at Conway Studios in L.A.,” says Valentine. “We’re literally feet away from millions of dollars of the world’s finest recording equipment, and I’m in there working on this 10-dollar Korg mini-keyboard.” He laughs. “And yet we came up with this track that we just loved.”

As Valentine’s comment suggests, Maroon 5 worked surprisingly quickly on ‘Overexposed’, which despite the A-list hook-ups arrives just 21 months after ‘Hands All Over’, the band’s 2010 collaboration with producer Robert John “Mutt” Lange. “We’ve taken a really long time to make our albums in the past,” Levine admits. “But I’m done overanalysing and making things more complicated than they need to be. If a song is great, it’s great. Be done with it.”

“There’s a new focus that’s set into us both personally and as a band,” Valentine adds. “We had such amazing experiences the first 10 years of this group, and I think we spent a lot of time enjoying it, which was great. But now it’s like, ‘Well, what do we do? We make records.’” The guitarist laughs. “Put it this way: In 2007 after the show we were definitely finding out where the party was. Now it’s more like, ‘Hey, let’s go finish that song.’ That’s what’s more exciting to us.”

Levine says that of all the band’s albums, ‘Overexposed feels’ “both most and least like Maroon 5. There’s lots of traces of the past, but it also hints at a new idea,” the singer explains. “More than anything I think this record says that it’s always cool to try – that you should always be willing to take a step beyond whatever feels comfortable.”