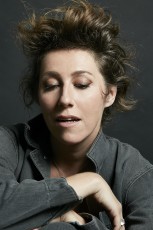 Singer-songwriters are meant to trade in whimsical pleasures, in the soft strums of a guitar, in worlds so delicate and small they could shatter at a single touch. Martha Wainwright doesn’t trade alongside them. Back with a second record that’s both tender and tough, beautiful and brutal, and simmering with invention and confidence, Martha forgot to read the rulebook. Either that, or she set all its pages aflame, strutted through the smoke, and emerged burnt and brave. And this time around, she’s happy about it.

It’s been three busy years since Martha released her eponymous debut album of confessional, fearless songs. And in that time, she’s had a lot to be happy about. She’s toured her songs internationally many times, watching them sweep up acclaim and awards with every flight ticket. She’s made music with The Who’s Pete Townshend, Damon Albarn’s Africa Express, Antony Hegarty and Snow Patrol, with whom she scored a top 20 hit. She married producer Brad Albetta, and brother Rufus, mother Kate McGarrigle, father Loudon Wainwright, Linda Thompson, Emmylou Harris and Ed Harcourt sang at their wedding. She covered Leonard Cohen’s songs for the film I’m Your Fan, performed Bertold Brecht and Kurt Weill’s Seven Deadly Sins with the Royal Ballet Company, and sang Pink Floyd’s See Emily Play with her mother at a Syd Barrett tribute – a song she liked so much she’s included it on her record. “What can I say? In terms of working with musicians, I’m definitely a whore. And a happy whore at that.”

Although Martha’s musical happiness has grown, her fans shouldn’t worry that their sharp-tongued girl with her heart on her sleeve (and her mind and her spleen and her guts and her bile) has gone away. After all, her album’s called I Know You’re Married But I’ve Got Feelings Too. What’s more, it’s a lyric from the album’s opening song, the powerfully-titled Bleeding All Over You. So far then, so Martha.

“The title sums up my dark humour. Plus it’s an homage to a few good men and women that I’ve loved at one time or another. After all, these people never go away. You end up loving them for life.”

Plenty of songs here are still bruised by the cruelties of love. Jimi is about “all the dreaming, madness and sadness that comes with heartbreak – the stuff takes up so much of our time, and for nothing”. Hearts Club Band is about loneliness, and about fitting into the company of people who “are always bleeding, metaphorically, from the inside.” You Cheated Me, a song Martha wrote in ten minutes, describes that experience in a nutshell. Elsewhere, there are songs scarred by Martha’s experiences with friendship and family too. So Many Friends is “a sad, night-time song” for old companions Martha has lost.  The George Song is about a friend who committed suicide. In The Middle Of The Night is about Martha’s mother’s brush with cancer last year, and “about the presence of death in our lives, and the knowledge that it is coming.”

Then there are the songs wounded by war and religion. Jesus and Mary tackles Martha’s wishes for faith, “and my wishes for the comforts of a God I’ve never found, and am not sure I want.” Tower Song alludes not only to the Leonard Cohen song Martha has sung many times, but to the war in Iraq, the Twin Towers in New York, and the siege of Sarajevo in which two lovers died in each other’s arms.

But amongst all the tragedy, lies a warm, beating heart. At the record’s very own soft centre sits Niger River, a song Martha wrote for her husband while she was in Mali with Africa Express. “We were travelling through the mangroves, and I kept thinking of Brad. I kept thinking about our love, and hoping that it would always be that high and that broad.”   Martha’s expressive, characterful voice has never been so beautiful as it is here. It swoops, soars and settles, and as strings, brass and woodwind circle her words, something widescreen and wondrous, mature and intense, heartfelt and hungry, emerges with pride. It’s the work of an artist at the top of her game.

Even Martha feels better about it. “It’s funny. Until recently, I was never sure whether I’d got into the music industry because of nepotism. I always questioned my reasons for starting to write. Was it because of my family? Would I ever get within an inch of their achievements? Back then, I never thought there was room for me.” She laughs down the phone, and suddenly that confidence shimmers like the sun. “And you know what? Right now, I feel like there might.”